In this lesson, we will review population growth and the factors that limit and support such growth. You will also review the biological roles species play in their environment.

We have reviewed the main players in the development of the theory of evolution and how population growth is limited by different factors, including the ability to reproduce and carrying capacity.

From 1979 to 1989, the African elephant population drastically declined. Environmental factors did not contribute to this decline. Rather, the elephants were heavily hunted by humans to support the worldwide demand for ivory. In 1990, the Convention on International Trade in Endangered Species (CITES) established a ban on the international ivory trade.

While elephant populations in Africa have shown a steady increase, there are still survival concerns. African elephants live in matriarchal herds. The social structure of the herds plays a significant role in survival. For example, the senior females carry historical knowledge relevant to the herd’s success. All senior herd members play an important role in the care and growth of younger animals. Knowledge about travel over long distances or locating food or water during drought conditions may also be a responsibility of elder herd members. Senior elephants also have the largest tusks.

In the late 1980s and early 1990s, scientists began observing herds without any senior members. Destroying the larger, more mature animals yielded the most ivory. It also left herds in the position of being led by younger and younger females. Scientists worried about the impact of these juvenile herds on long-term elephant survival.

Age structure is measured in three ways. Population pyramids are a graphic reflection of age and sex. 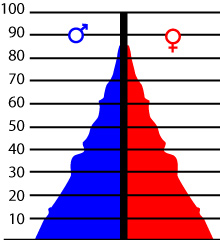 Age structure is important because it is a reflection of the number of living individuals in a population. Age structure is affected by births, deaths, emigration, and immigration. Individuals leaving or breaking off from the originating population represent emigration. Individuals immigrating into or joining an existing population increase its size. There are many factors affecting population shifts. Density dependent factors include variables such as competition, territorial behavior, stress, and decreases in births, predation, and disease. As a population grows denser, these factors increase death rates or reduce birth rates. Anything that reduces the potential for individual survival in a dense population is a density dependent factor.

Variables such as fire, avalanche, drought, and human impact fall into the category of density independent factors. For example, plant and animal populations could be significantly diminished by long-term and unexpected drought conditions. Density independent factors affect a population regardless of its size. In the case of extended drought conditions, entire populations would be affected.

The age structure of North Americans will have long-term implications. For example, the population known as “baby boomers” represents a significant increase in births following World War II. The baby boomer group makes up more than half of the United States population. This group is expected to live longer than their parents. As humans continue to live longer they work longer, consume more resources, and require more medical care. The baby boomers are followed by a bust generation (born after 1965) who will be responsible for caring for the boomers and supporting them. By comparison the demographic bulge is quite different in developing countries. 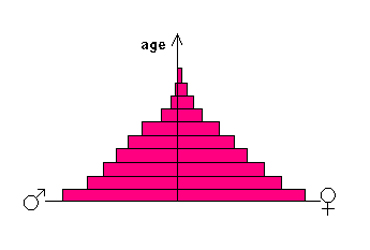 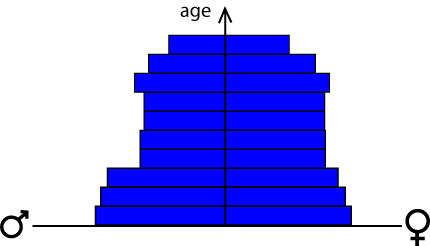 Consider the population structures and their implications for humans over time. Humans have developed the capability to alter limitations on population size. With fewer growth limitations, populations have exploded worldwide. This has also led to significant competition for habitat space previously used by wildlife. Humans have also developed the technology to control insect species once considered to be a nuisance, to grow more food per acre, and to maximize the resources that people consume. Human-influenced habitat destruction is the primary reason species around the world are threatened and becoming extinct.

Ecological factors that interact with populations or species in a given environment are usually divided into two groups: abiotic and biotic. Abiotic factors range from geological, geographical, and hydrological, to climatological. Specific abiotic factors include:

The interactions among living organisms and with their environment occur as part of a larger cyclical mixing of elements (most importantly carbon, oxygen and nitrogen) and water, which are called biogeochemical cycles. These processes provide relative stability to the biosphere and maintain the conditions necessary for life to continue. This self-regulation, supported by negative feedback controls, ensures the natural longevity of ecosystems worldwide. Unfortunately, because of tremendous human population growth and the parallel problems of pollution and unsustainable natural resource use, we are creating an unbalanced biosphere.

The Law of the Minimum states that population growth limitations are set by the environmental resource in shortest supply. Access to food, water, space, shelter, soil, and light could limit population size. At the same time, species play a biological role in the environment. This role is called a niche. From reviewing evolution theory it is evident that reproductive success is a survival indicator. The ability to acquire nutritional resources and avoid predators also supports survival. The combination of environmental requirements and physical conditions determine an organism’s ability to live abundantly in any given place. This combination also culminates in what represents an organism’s niche. Therefore, an organism’s niche refers to its use of environmental resources, as well as its “fit” into the ecosystem.

Intraspecific competition is avoided when adult plants create shade so that seedlings are unable to geminate under them. Seed dispersal strategies such as animals, wind, and water keep plants from competing for the same space. Some plants secrete substances into the soil, thereby making it impossible for seedlings to grow.

Animals also have strategies for coping with intraspecific competition. Utilizing different niches, having feeding habits specific to developmental stages, and territorialism are all strategies animals utilize. Both plants and animals benefit from these strategies as offspring move into adjacent areas.

Scientists make another distinction related to niche. Theoretical niche refers to a species’ potential to use available resources, without predation or interspecific competition from other species. By contrast, a species’ realized niche is one that is occupied by the species and varies from place to place (in response to interactions with other species, such as predators and competitors).

Gause’s Law of Competitive Exclusion focuses on the competition between diverse species. A Russian biologist Georgyi F. Gause (1910 – 1986) promoted the idea that two or more species could not coexist when they were competing for the exact same resources. Gause believed that one species would gain access to more resources and have a subsequent competitive advantage over the other species. Under these conditions the second competitor would eventually become extinct. Not all biologists completely agree with Gause’s law, pointing to examples such as plankton. Plankton species all rely primarily on water-soluble minerals and solar energy. Contrary to the Law of Competitive Exclusion, large numbers of plankton species successfully share resources in the open ocean.

Species do not live in isolation. Instead, diverse species share ecosystems. In this sharing, some species develop adaptations that enable them to survive while minimizing competition for primary resources. Resource partitioning enables different species to utilize the same resource by accessing it differently. For example, several tropical bird species are fruit eaters. Some eat only a particular fruit. Others in the same niche may eat at a different time of day or may eat the same fruit but from a different location on the tree (e.g., higher or lower on the tree). Still others may feed on fruit at different stages of its development. This partitioning allows many different species to share the same resource and successfully survive. 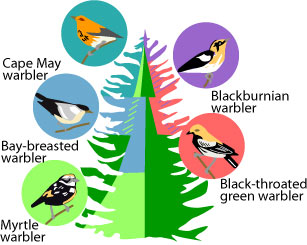 At the same time, resource partitioning is an aspect of the evolutionary process. Subpopulations of a species assume behavioral adaptations to avoid competition. These adaptations create a divergence from the parent population. Over time, the subpopulation diverges into its own species. 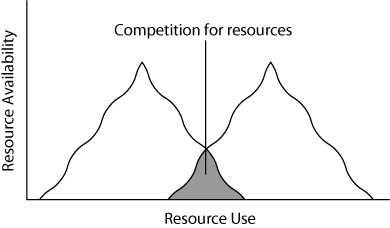 As a consequence of resource partitioning, some species exhibit character displacement. Character displacement occurs when two species share the same niche. If they were not competing, the two species would not need to evolve differently. For example, on the Galapagos Islands, the finches Geospiza fuliginosa and Geospiza fortis share the same niche. G. fortis has a larger beak for consuming larger seeds. The two finch subspecies have developed resource partitioning strategies. These finches have been observed on separate islands, as well. Under those conditions, both species have intermediate-sized beaks enabling them to consume a broader range of seeds. Character displacement differences are an evolutionary response to interspecific competition.

Why can’t we all just get along?

Mutualism is the symbiotic relationship whereby both organisms benefit (+/+). Through mutualistic relationships, organisms are safe from predation or share in the acquisition of food. In facultative mutualism, both organisms benefit through living in close association. The organisms may rely on one another in proximity. For example, small fish like the wrasse consume parasites or small organisms that attach to larger fish. The wrasse benefits from a ready food supply and the larger fish are cleaned of unwanted organisms.

Obligate mutualism is a necessary survival connection between organisms. Honeybees are responsible for pollination of certain flowers. The bees can see blue, yellow, and ultraviolet. Bee-pollinated flowers are most likely to have these colors. Collecting pollen from flowers enables bees to feed the growing brood inside the hive. Moving from bloom to bloom, the bees support plant reproduction by carrying pollen along with them. 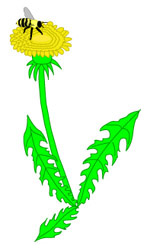 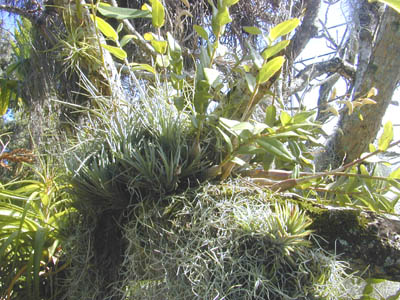 Another type of symbiotic relationship benefits one organism while harming or destroying the other (+/-). Parasitic relationships benefit the parasite that harms or destroys its host. Lice, tapeworms, fleas, ticks, and malaria are all examples of parasites. These parasites work externally or internally to benefit their own survival. The parasite lives in or on a host organism and may weaken the host’s ability to survive. Parasites demonstrate two general survival strategies: one is living in or on the host without killing it, while surviving long enough to reproduce successfully; the other needs the host species to die in order to complete the stages of their own life cycle.

All of these interactions are examples of co-evolution. The species have evolved through influential relationships. Some of the relationships are beneficial. Some are not. Either way, genetic change has occurred in both species as a result of the relationship. Each species has exerted selective pressure on the other to the extent that they both evolve. Some species co-evolve into very limited symbiosis. Yucca plants are totally dependent upon the yucca moth for pollination. The plant bloom has evolved into a shape only accessible by the moth. If the moth population went extinct, the yucca population would be affected as well.

Review of Vocabulary and Concepts